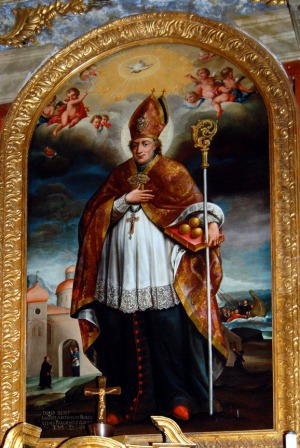 Altar piece of the San Nicolo Catholic church in Castelfondo

Did you know that the patron saint of Castelfondo is San Nicolò? That’s right, the church of our ancestral village is named after San Nicolò in recognition of an early christian saint who is the inspiration for Father Christmas, aka: Santa Claus. In English he is known as Saint Nicholas.

San Nicolò di Bari lived during the 3rd to 4th centuries AD in a Roman colony that is now modern day Turkey. He died on December 6, 343 AD of old age.

There are several legends and miracles attributed to San Nicolò. One in particular may be the beginning of the gift-giving tradition associated with Father Christmas. Upon hearing of a poor man who could not afford dowries for his three daughters, Nicolò (then the Bishop of Myra) gifted part of his wealth to the daughters in the form of three bags of gold, saving them from a life with no husbands and most likely, forced prostitution. To read the entire story, (which includes one sack of gold being thrown down a chimney!) I recommend visiting the site: Life in Italy. This informative page includes the historical details of San Nicolò’s life and the explanation of how his legend morphed into today’s Santa Claus.

The photograph above pictures a prominent painting gracing the baroque altar of Castelfondo’s beautiful church. During my 2011 visit to the village, I was given a tour of San Nicolò by a lovely little woman who is the caretaker. She took me by the arm and escorted me around the altar, all the while describing paintings, frescoes and statues that adorn the church. Of course her explanation was in Italian! I nodded dutifully as I caught a word here and there. I was so appreciative that she had turned on the lights for us. Her obvious devotion to the church and the history it represented touched my heart. While she spoke, I could feel the spirit of my ancestors fill the pews. Generations of Genetti, Marchetti and Zambotti had worshiped in this church for hundreds of years! They had walked this very isle where I now stood. I’m sure they had a family pew where they knelt to pray, just as I had as a child in Hazleton, PA attending church at St. Gabriel’s with my father. I was awed and overwhelmed by that moment … reaching through time to share a moment with the ancestors who had shaped my life.

As we gather with our families this Christmas, remember to thank your ancestors. Without their bravery, determination and Tyrolean values, our lives would be so different. How wonderful it is to know our roots and inherit a rich culture that we share with many cousins around the world.

Merry Christmas and Happy New Year to all of my cousins!