Here is a little video from our ancestral home of Castelfondo. Watch closely and you will see the Genetti homestead!

Thank you to “I Love Val di Non” for providing this clip. You can see more photos and videos from the beautiful Val di Non at their Facebook page: https://www.facebook.com/ILoveValdiNon/ 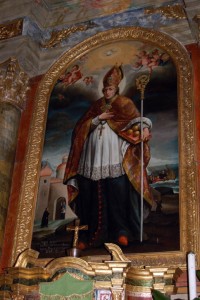 Last year I published a Christmas blog post about San Nicolò. It turned out to be one of my favorite posts of the year. Since we have many new subscribers to our site, I felt it was appropriate to republish the piece today in honor of our cousins throughout the world. Wishing you all a joyous Christmas!

Did you know that the patron saint of Castelfondo is San Nicolò? That’s right, the church of our ancestral village is named after San Nicolò in recognition of an early christian saint who is the inspiration for Father Christmas, aka: Santa Claus. In English he is known as Saint Nicholas.

San Nicolò di Bari lived during the 3rd to 4th centuries AD in a Roman colony that is now modern day Turkey. He died on December 6, 343 AD of old age.

There are several legends and miracles attributed to San Nicolò. One in particular may be the beginning of the gift-giving tradition associated with Father Christmas. Upon hearing of a poor man who could not afford dowries for his three daughters, Nicolò (then the Bishop of Myra) gifted part of his wealth to the daughters in the form of three bags of gold, saving them from a life with no husbands and most likely, forced prostitution. To read the entire story, (which includes one sack of gold being thrown down a chimney!) I recommend visiting the site: Life in Italy. This informative page includes the historical details of San Nicolò’s life and the explanation of how his legend morphed into today’s Santa Claus.

The photograph above pictures a prominent painting gracing the baroque altar of Castelfondo’s beautiful church. During my 2011 visit to the village, I was given a tour of San Nicolò by a lovely little woman who is the caretaker. She took me by the arm and escorted me around the altar, all the while describing paintings, frescoes and statues that adorn the church. Of course her explanation was in Italian! I nodded dutifully as I caught a word here and there. I was so appreciative that she had turned on the lights for us. Her obvious devotion to the church and the history it represented touched my heart. While she spoke, I could feel the spirit of my ancestors fill the pews. Generations of Genetti, Marchetti and Zambotti had worshiped in this church for hundreds of years! They had walked this very isle where I now stood. I’m sure they had a family pew where they knelt to pray, just as I had as a child in Hazleton, PA attending church at St. Gabriel’s with my father. I was awed and overwhelmed by that moment … reaching through time to share a moment with the ancestors who had shaped my life.

As we gather with our families this Christmas, remember to thank your ancestors. Without their bravery, determination and Tyrolean values, our lives would be so different. How wonderful it is to know our roots and inherit a rich culture that we share with many cousins around the world.

Merry Christmas and Happy New Year to all of my cousins!

A lovely video was posted recently on a Facebook group that I follow called “Chei da Chastelfon”. Created by Maurizio Mau Ruatti, it captures many of the beautiful memories shared by members of this group over the past year, most of whom are from Castelfondo or have roots in the village. Some of our Italian Genetti and Marchetti cousins have also posted photos and documents on this page – and a few of their faces show up in this little video clip.

I have found this group to be a genealogy treasure of images and information – and such an amazing way to keep in touch with our family in Trentino. Although our cousin connection may be distant, their photographs peel away years and generations, touching our hearts with Tyrolean heritage.

Mille grazie Maurizo Mau Ruatti! Your American cousins appreciate “Chei da Chastelfon, in video” and send our warm regards during this holiday season. My special thanks also to Giovanni Marchetti who leads this group. Giovanni has helped me with translating, identifying photos and has been very helpful with communications. Buon Natale a tutti!

The Santuario di San Romedio is an evocative and spiritual sanctuary located in the Val di Non not far from from our ancestral village of Castelfondo. Consisting of several chapels and churches connected by steep stone stairways, the ancient structure rises up from a rocky cavern. The oldest part of the Santuario dates back to about 1000 AD.

I hope you enjoy a glimpse into one of the wonders of the Val di Non. We have shared this video from the Facebook page: I Love Val di Non.

We have just added two wonderful new books to our online Family Bookstore. If you’re looking for reading material this holiday season, here are a few selections that might peak your interest. 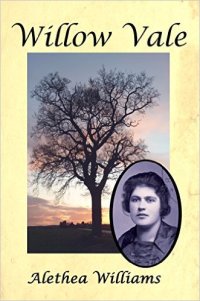 Willow Vale – My Review: Let me say first off that I rarely include novels in our Bookstore. But this little tome tugged at my heart, begging to become a part of our Tyrolean heritage library. Using her grandmother (Nona) as inspiration for the lead character, Francesca Sittoni, the author paints the world of a beautiful young widow with a precocious toddler from the Val di Non in Trentino just after WW I. Her little village in the Tyrolean valley has changed hands from Austria to Italy. After Francesca’s beloved husband dies, she must find another spouse as soon as possible to support herself and her young daughter. She is soon sold off as a war bride, boards a ship to America and joins her new husband in the coal mining region of Wyoming. I don’t want to spoil the rest of the story for you, but let’s say that the tenacious and stubborn Francesca refuses to give up in a new land even when her second husband is no longer in the picture and she fears being deported back to impoverished Northern Italy.

I fell in love with the story of fictional Francesca. Since many of the Genetti family set down roots in Wyoming, working the dangerous coal mines and eking out a living from the dry, dusty land – this was a story that echoed our own journey to America. I think any Tyrolean American will find “Willow Vale” captivating and heartwarming – a wonderful gift for a grandparent or elder. Younger generations will experience an eye-opening glimpse into the struggles of our first generation ancestors as they experienced a new life in America. Find Willow Vale on Amazon: buy now 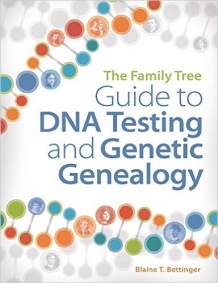 The Family Tree Guide to DNA Testing and Genetic Genealogy – My Review: One of the latest books to enter the field of genetic genealogy, I found this to be a very helpful guide and a great addition to my growing DNA library. Information is current and as accurate as possible in this ever-evolving science. Most of the material presented can be easily understood by beginners. Advanced concepts are also presented later in the book, but this should not be a deterrent for newbies as they can always come back to these sections after gaining a bit of expertise in DNA testing. I particularly found the chapters relating to surprises in one’s ancestry, such as illegitimacy and adoption, to be extremely informative and sensitive to this topic. Most books about genetic genealogy only touch upon the subject of non-parental events. The author handled this area of DNA testing/genetic genealogy with tact and depth. There are many charts, diagrams and illustrations included in this book. I purchased the ebook version and had no problem viewing the graphic information. I highly recommend this guide as a comprehensive instruction manual for both beginners and advance students of DNA. Find The Family Tree Guide to DNA Testing and Genetic Genealogy on Amazon: buy now

Our Family Bookstore is full of books about the Tyrolean culture, travel guides for Northern Italy and cookbooks featuring our native cuisine. We also have guides on how to write your own Family Legacy and even a few autobiographical books written by Tyrolean Americans. Our new section on DNA Testing and Genetic Genealogy was just added a few months ago. Stop by and browse our Family Bookstore today!