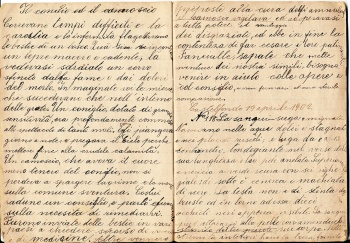 Here is another interesting moral tale involving three animals. We don’t know if this is an original story written by Tillie or her sister Dora. It may have also been just a school assignment in the practice of copying text provided by the teacher. I enjoyed the ending of this story very much and I think you will too!

Also – the “chamois” mentioned in this translation is a type of mountain goat, similar to an antelope, native to alpine regions.

Translation: Page 20, left side and top of Page 21, right side 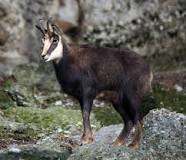 The Hare and the Chamois

The times were difficult and famine and illness were hitting the animals of the wood. There was a skinny and ill hare and a tired deer lying exhausted by famine and pains. You can imagine the miserable things happening inside the animals’ lairs.

A very sensitive hare was deeply moved seeing such evils and cried day and night and prayed Heaven to end this cruel calamity.

A chamois with a less tender heart than the hare did not lose time in shedding tears for the common misfortune. It gathered a council and spoke very well about the need to solve the problem. Some animals were sent to various villages to ask for help, food and medicines. Other animals took care of the ill. The chamois watched and worked to be of advantage to the miserable and at the end he could have the joy to stop their suffering.

Girls, you must understand that when our fellow beings are unfortunate we must help them through concrete action and advice not just restricting yourself to useless compassion.

Once again, we extend our thanks to Loretta Cologna for her patience in translating Tillie’s Notebook. 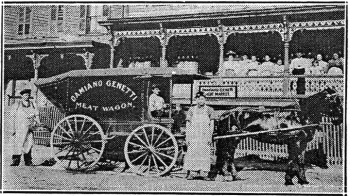 I was recently sifting through news articles about the Genetti family and found a fairly substantial story of historical importance published right before our 2016 family reunion by The Citizens’ Voice. Although both Bill Genetti and myself had been interviewed by phone for this article, it had completely slipped my mind until I stumbled upon it in search results.

Since the extensive article relates a historical timeline of the Genetti family in Pennsylvania, I felt it should be a part of the Family Stories section on our website. Take a moment, grab a cup of coffee and click here to read – Business: A Family Affair for Genetti Clan.

Find all of our Family Stories under the Gallery section of the main menu.

See everything featured in our online Gallery.

Lots more stories and memories to read at: Family Stories.

Don’t forget a browse through our extensive Photo Gallery featuring photographs from many branches of the Genetti Family. 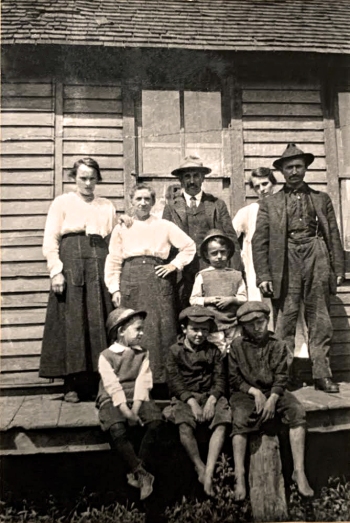 I have just added our first photograph to the Michigan Genetti Family Photo Gallery. Thanks to John and Nancy Faulkner, we have a beautiful period image from Bessemer, Michigan dated 1919.

Representing three families, the photograph appears to have been casually posed on a family porch. All of the parents pictured here came from the Val di Non and likely moved to Bessemer (near Ironwood, MI) because it was a mining region with available work. Many Tyroleans, including several Genetti cousins, settled in this area.

Those pictured according to the handwritten note attached to the photograph are:

Here is a little background information about the families in this photo:

Emil and Albert had long, distinguished military careers. Emil attended Michigan State University, became a doctor and joined the US Army, serving in WW II and Korea. Emil retired  as a Colonel and went on to practice medicine in California.

Like his older brother, Albert attended Michigan State University, graduating with a bachelor of science in forestry. He joined the US Army as a career military man rising to the rank of Colonel. Albert was a World War II veteran. Special note: Albert’s son, also named Albert Joseph Genetti, Jr., attended West Point, is in the Military Times Hall of Valor, and retired as a decorated Major General from the US Army. (Click here to see more about Albert Jr.)

The couple’s third son, Florian, owned a barber shop in Bessemer and became a local politician.

Peter and Mary divorced in 1930 after fifteen years of marriage, with Mary gaining custody of the three boys. She eventually remarried Joseph Regis.

Next we look at Emma Fiorentina (Flora) Marchetti (1884-1959), originally from Castelfondo, who marries Pietro (Peter) Giambattista Ferrari (1877-1959) from Revo (Peter is not shown). In 1905 the couple marry and live in Wisconsin. The two boys seated on the right in the photograph are, Joseph Christopher Ferrari (1911-1999) and Florian Lewis Ferrari (1909-1986). Joseph and Florian were the couple’s youngest children. They also had a daughter, Mary Elizabeth Ferrarri (1906-1976) and another son, George David Ferrari (1908-1992). All four of the children were born in Wisconsin. The family later moved to Bessemer, Michigan where Peter supported his family as a miner.

Moving on to the older couple in the center of the photo, I’m not positive of their identification, but I believe they are Richardo Menghini (1860-?) and his wife Maria (Flor) Menghini (1864-?). Both of Brez, Tyrol, the couple came to Bessemer sometime in the 1880’s. They had a total of seven children. According to the obituary of one son, Louis Menghini (1889-1952), the family returned to Brez in 1894. By 1907 Louis and his family came back to Bessemer. From the date of this photo, we know that Richardo and Maria Menghini were neighbors of the Genetti and Ferrari families in 1919. But by this time the couple’s many children were adults and probably not living at home when this photo was taken.

We would like to thank John and Nancy Faulkner for contributing to our Family Photo Gallery. Nancy is the granddaughter of Pietro (Peter) Giambattista Ferrari and Emma Fiorentina (Flora) Marchetti who is pictured standing on the far left of our group photo. Mille grazie Nancy and John! 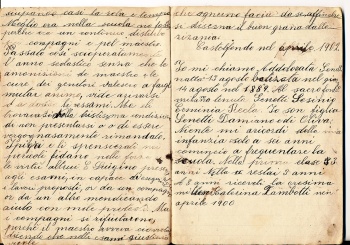 As we welcome in a new year and a new decade, I hope everyone had a joyous and safe holiday shared with family and friends.

We return to our translation of Tillie’s 1902 Notebook with another strange passage. Both Loretta (our translator) and I are baffled by this short entry.

Again, we have a page penned by Tillie’s older sister Addolorata (Dora). Although brief, it offers a personal glimpse into Dora’s young life and perhaps hints at a hereditary learning disability. Here is the translation followed by my commentary. 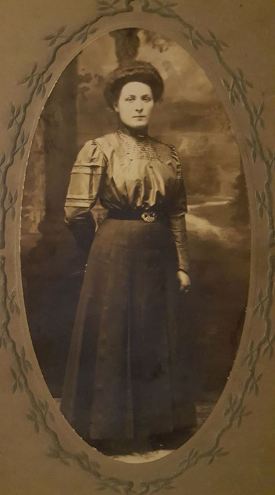 My name is Addolorata Genetti, born on the 13th of August 1889, baptized on the 14th of August 1889. My godfather and godmother at the sacred font were Sisinio Genetti and Erminia Recla.

I am Damiano and Oliva Genetti’s daughter.

I don’t remember anything about my childhood, just that at six years of age I started attending school. I repeated the first class for three years and the second for three years.

At eight I received Confirmation in April 1900, my godmother was Caterina Zambotti.

In this short entry, there are a number of strange and confusing statements made by Dora.

As Loretta points out – Dora says that she receives the sacrament of Confirmation at the age of eight years old in 1900, but her actual age in that year was eleven!

She also says that she repeated the first grade three times as well as the second grade three times! To me this seems excessive. Since both Loretta Cologna and her mother were school teachers, I asked her if this was a normal occurrence. Although schools at that time were strict, requiring children to reach a certain level of accomplishment before advancing to the next grade, Loretta also agreed that repeating a grade three times seemed odd. And repeating two successive grades three times was certainly unusual!

We don’t know whether or not this entry is accurate in describing Dora’s schooling. But if it is, the thought occurred to me that Dora may have had a learning disability making it difficult to complete school assignments. Since I know several people with dyslexia, this was my first thought to explain Dora’s difficulty in school. My own husband is on the dyslexia spectrum. Michael graduated from college with an Engineering degree and has a sharp, analytical mind; however he has struggled with reading and the reversal of numbers throughout his entire life.

Dyslexia (originally known as “word blindness”) was virtually unheard of and certainly not recognized by teachers in 1902. It also has a genetic component, meaning it may be passed down through one or both parents. Here is a definition from the Family Education Network:

Dyslexia is regarded as a neurobiological condition that is genetic in origin. This means that individuals can inherit this condition from a parent and it affects the performance of the neurological system (specifically, the parts of the brain responsible for learning to read).

It’s not uncommon for a child with dyslexia to have an immediate family member who also has this condition. Also, it’s not unusual for two or more children in a family to have this type of learning disability.

Dora may have struggled her entire life with issues tied to dyslexia, now considered a well-recognized genetic disability that affects between 5 – 15% of the population. Although I’m sure she was an intelligent woman who adapted well to her new home in Pennsylvania, Dora probably had a difficult time with the skills of reading, writing and spelling.

What do you think? Does dyslexia run in your family line?

About others mentioned in this Notebook Entry:

Sisinio Alessandro Genetti (1854-1908). This was Dora’s uncle and her father’s oldest brother. Sisinio was the only sibling of Damiano Genetti who did not emigrate to America. Tragically he died in Castelfondo at a rather young age of 44 due to tuberculosis.

Erminia Enrica Genetti Recla (1876-1972). This is Dora’s aunt and her father’s youngest sibling. Erminia emigrated to Pennsylvania in 1890, a year after becoming Dora’s godmother. She eventually settled in Spokane, Washington with her husband, had eleven children (eight survived to adulthood), and died at the advanced age of 95. Erminia outlived her goddaughter by six months.

Caterina Dallachiesa Zambotti (1853-1939). Most likely this is the person Dora references as her Confirmation godmother. Caterina was her aunt by marriage, married to her mother’s brother, Simone Zambotti.

September 9, 2022: All obituaries found on the Memorial page have been updated with many new ones added, dating back to 1928.

September 2, 2022: The pages for Family Stories and Memorials have been added to the main menu for easier access.