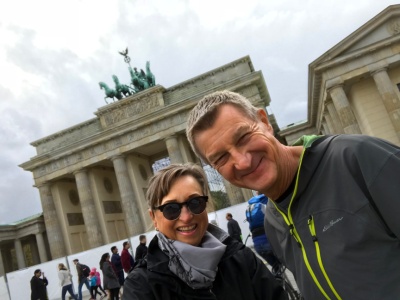 Louise and Michael at the Brandenburg Gate, Berlin, Germany

Where in the world is Louise? Have you been wondering why I haven’t posted in a while? Well my summer was filled with art projects and redesigning my personal website: LaRoach.Art. In case you didn’t know, I am a digital artist/designer. Genealogy is my hobby. So if my spare time is in short supply, my family research sometimes ends up on the shelf until I have an extended period of quiet time necessary to concentrate on old records.

But when September rolled around this year, Europe beckoned!

My husband and I share a love of travel and exploration. Every year we get out-of-town and experience a new city, country or culture. This year we chose Berlin, Salzburg and Florence to visit, also sandwiching two weeks in the middle of our trip to see cousins and friends in Bolzano, Fondo, Castelfondo and Trent (Northern Italy). Along the way I documented art, visited churches and enjoyed the rich culture of Germany, Austria and Italy.

I am 50% Tyrolean (Trentini) and 50% German/Prussian. Although this was my 3rd trip to Italy and I am very familiar with my Genetti origins, culture and ancestral home, I know little about my German ancestry. Not having visited Germany or Austria on past trips, this was an opportunity to experience the blending of cultures that make up my DNA. 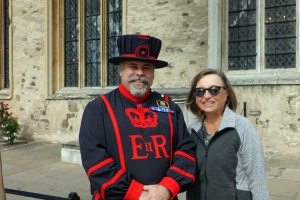 Louise with one of the Tower’s Beefeaters

Michael and I flew into Heathrow Airport and decided to begin out trip with a few days in London Town. The Tower of London was a short walk from our hotel and since we had missed this site on a previous visit to England, we decided to spend the day walking through the murky legacy of England’s infamous prison. I snapped closeups of interesting architectural details, had my photo taken with a Yeoman Warder (also known as a Beefeater), and marveled at the tales of historical figures imprisoned throughout the tower’s lengthy history.

Our next destination was Berlin, Germany. My husband had chosen this city and I was also curious to see modern Berlin. Our AirBnB was a short walk from Checkpoint Charlie and one section of the Berlin Wall, important locations when the country and city were politically and physically divided by Cold War Russia. Since the Berlin Wall was both erected and eventually torn down within my lifetime, (yes I am old enough to remember the beginning of the wall), this was a point in history that I could identify with, as well as compare to our current political turmoil. Although this is an ugly part of Berlin history, particularly because it took place only 16 short years after the devastation of WW 2, I applaud the German people and their effort to remember and document what happened, in an effort to never allow the separation of people and state to take place again.

While in Berlin I had a most unusual cousin experience. I am friends on Facebook with various cousins in the United States, Austria, England and Italy. We had just arrived in Berlin and I happened to see a Facebook post by one of my 2nd cousins Maria Genetti, daughter of Gus and Val Genetti of Pennsylvania. (FYI – Maria’s grandfather and my grandfather were brothers. To be a 2nd cousin you share a set of great-grandparents. Maria, her siblings and I have the common ancestors of Damiano Genetti and Oliva Zambotti.)

In the Facebook post Maria was celebrating Oktoberfest in Munich with a large mug of frothy beer. How funny, I thought, Maria is also in Germany! I sent her a message that I was in Germany too, but a few hours away in Berlin. Maria responded that she had already flown home and was posting from the US, but that her sister, Patricia, had been vacationing in Malta and was flying home through Berlin. She thought it might be possible for the two of us to meet up. Maria sent a message to her sister and soon I received a text from Patricia. Yes, she was in Berlin for just two days and could we rendezvous the following day. Although we were in different parts of the city, Patricia managed to maneuver the underground system and we met for a pleasant chatty cousin dinner at an Italian Trattoria around the corner from our apartment. 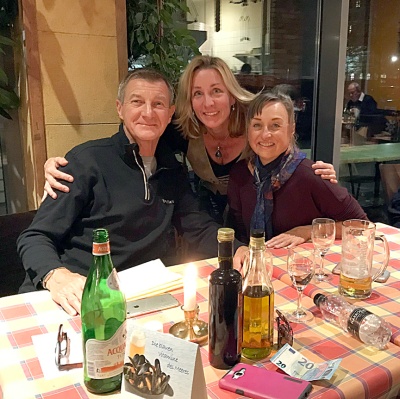 The next day Patricia flew home and by the end of the week, we were on our way to picturesque Salzburg, Austria.

What are the odds of two American cousins showing up in the same German city at the same time without the knowledge that either were even traveling?! What a very strange cousin coincidence this was indeed! It never ceases to amaze me just how small the world really is and how we are all connected!

A shout-out to Patricia Genetti! Thank you for a memorable evening in Berlin. Perhaps we will stumble upon each other again in our future travels.

Since this series of blog posts is centered around family connections and genealogy, I am writing about my art adventures in Europe over at my other blog. You can read the first post in my “Artful Traveler” series at: LaRoach.Art

Look for more stories from my 2018 trip in future blog posts. Until then – ciao e una abbrattio.

2 comments for “The Traveling Genealogist: Part 1 – London, Berlin and a Cousin Coincidence!”