One hundred years ago on November 11, 1918, the ethnicity and homeland of the Tyrolean people changed. For on that day the Armistice of World War I was signed, breaking apart the Austro-Hungarian Empire. Shortly afterwards, on September 10, 1919, the Treaty of Saint Germain was signed, formerly annexing German-speaking South Tyrol and Italian-speaking Trentino to Italy. For centuries this entire area was inclusively known as “Tyrol”. With signing of the 1919 treaty, the region of Tyrol located south of the Alps was transferred from Austria and now became the northern Italian provinces of Trentino-Alto Adige.

According to Lou Brunelli, publisher of “Filò: A Journal for Tyrolean Americans”, Tyrol had a long cultural history stretching back 915 years under Austrian sovereignty:

In comparison, Italy was a young country, having only become a unified Kingdom (a monarchy) in 1861. By 1922 it fell into a Fascist dictatorship under Mussolini. After World War II, Italy became a democratic republic on June 2, 1946. 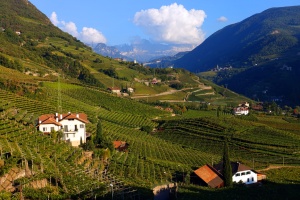 View of the Dolomites from Bolzano/Bozen, Alto Adige (South Tyrol)

For most of the past millennia our ancestral lands were influenced and controlled by Austria. Although our ancestors spoke Italian and regional dialect, their nationality and passports prior to 1919 stated that they were citizens of Austria, as they had been for centuries. Now with the stroke of a pen (and much political maneuvering by Italy), the region became Italian. (The events that lead up to Tyrol becoming part of Italy and the subsequent suppression of Tyrolean culture is a complicated and involved story. If you would like to read more about the history of this region, I have provided informational links at the end of this blog post.) 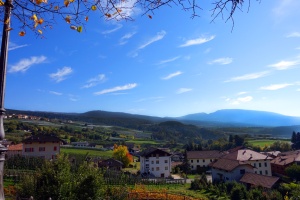 Since most Tyroleans emigrated to the United States prior to the 1918/1919 annexation, they came to America as Austrian citizens, and were never really considered Italians. However our relatives who remained in Trentino, now officially became Italian citizens. Mr. Brunelli told me that 97% of USA-bound immigrants arrived before the annexation and were not subjected to the subsequent Nationalism fueled by Fascism that occurred particularly in the Province of Alto Adige/Sud Tirol.

The confusion of ethnicity for Tyrolean immigrants is reflected in the United States Federal Census. My immediate family is identified in three different censuses as: Austrian, Swiss and Italian! I have seen other Tyroleans listed in census as Bavarians and Czechoslovakians. But when you research our shared genealogy, you realize that all of these families are from the same region of the Val di Non, often from the same village! For those unaware of historical events, the 1900, 1910 and 1920 US Censuses can seem bewildering when it refers to ethnicity. Are we Austrian, German or Italian? Is Tyrolean an ethnicity if it doesn’t exist as a country? 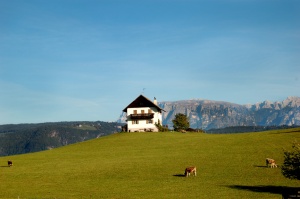 In the latest issue of Filò (Volume 19), publisher Lou Brunnelli (a 1st generation Tyrolean American) offers an insightful answer to the cultural and ethnic questions that plague American descendants of Tyrolean ancestors. He has given me permission to reprint this issue’s Introduction here:

Father Bolognani, the historian, sociologist, and apostle of our Tyrolean American community asserted the following … “A strange situation hindered the immigrants from the Trentino, making life more difficult for them then for other ethnic groups that arrived as the same time. Though they spoke no German and were Italian by language, they belonged to the Austrian empire and held Austrian passports. Considering themselves Austrian, or Tyrolean, they did not settle in cities as did most Italians. A search for their identity was difficult.” In other words, our people sought their definition, their differentiation from other groups. As their homeland, the ancient Tyrol was annexed by President Wilson and the Allies without a plebiscite [direct vote by eligible voters to decide an important public question] to Italy, they literally became ethnic orphans as Italy adopted a process of Italianization, becoming Fascist and then our [America’s] political adversary as they declared war on us in their affiliation with the Axis Powers. Defeated in the war and recovered with our American help, Italy became culturally adverse by no longer differentiating our history [Tyrolean] and our identity and imposing on us an identity that they had evolved while forgetting ours. What happened after the annexation, happened there and not here [America] … to them and not to us.

The Filò does not engage in a political polemic but legitimately and justifiably seeks to differentiate, to enhance the literacy and legitimacy of our historic existence and experience. Article by article it asserts with pride and joy: that who we are is who we were! ~ Lou Brunnelli

I find it fascinating that our immigrant ancestors brought to America a culture that they kept alive in small communities, but that 100 years later many might say no longer exists in their ancestral homeland. Even today there is a conflict brewing between Austria and Italy concerning the proposed dual-citizenship for German-speaking South Tyroleans (see articles noted below).

Many of us were told as children that we were Tyrolean, not Italian. This concept might seem confusing to our cousins in Italy. But our grandparents and great-grandparents arrived in America as Austrians, became United States citizens and never accepted the label of “Italian”. From the scribbling and crossing out of country origins I have viewed in the US Census, our ancestors were just as confused about their ethnicity after the annexation as we are today attempting to describe our own background as Tyrolean Americans.

In conclusion, I take no sides and make no opinions concerning the ethnicity of Trentino-Alto Adige. I present this information only as a means to bring understanding to our shared Tyrolean American experience, place our ancestry in context to the 1918 Armistice and grasp how the events of the past century have changed Tyrol and its people.

My thanks to Lou Brunelli for sharing his knowledge and insights of Tyrolean culture. I highly recommend subscribing to Lou’s publication Filò: A Journal for Tyrolean Americans. It is a quarterly magazine provided free of charge to the descendants of Tyrolean immigrants.

Click here to register for a subscription to Filò

Filò: A Journal for Tyrolean Americans (where you can scroll through current and past issues of Filò)

South Tyrol: A Minority Conflict of the Twentieth Century (Studies in Austrian and Central European History and Culture)

Italy and Austria at odds over South Tyrol dual-citizenship